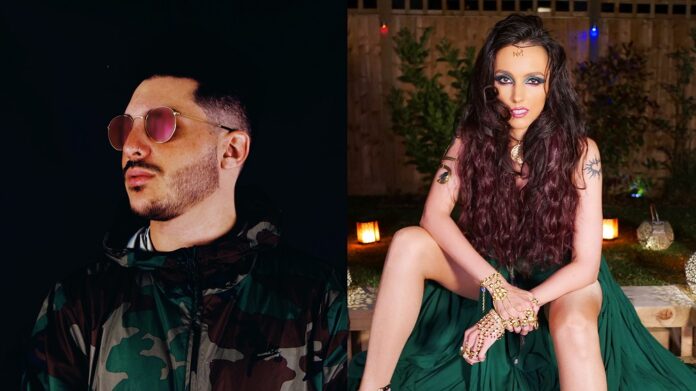 Nathassia (pronounced Natasha) being half Dutch & half Indian, emanates a mesmerising quality – bringing together both eastern and western cultures in spellbinding style. She now joins forces with one of Argentina’s hottest producers & electronic music artist. Federico Fragala a.k.a. D3FAI (Revealed/Spinnin’/Dim Mak/Outlaw) has been making a big name for himself in recent years, picking up heavyweight support and collaborating with Blasterjaxx and Deorro, as well as official remixes for Hardwell and Steve Aoki.

Following on from the success of their first collaboration – ‘Change The World’, which had key support from Kiss FM and was playlisted on Club MTV & MTV Dance International, Clubland TV and reached the MTV UK Top 20. We caught up with Nathassia and D3FAI as they build on their creative synergy returning with another slick joint release, this time with ‘In My Head’ at centre stage.

EDM Nations: Hi Nathassia and Federico (a.k.a. D3FAI) – thanks for joining us! You’ve each established your own careers as artists in the music industry – can you tell us about your respective journeys into the electronic music scene & how your paths first crossed?

N: Hi guys thanks for having us! I am now living in London, but I grew up in The Netherlands and during my studies in International Music Management at Haarlem University I went to London for work experience with ArchangelUK (who I met at ADE and are now my management!) On one of my first working days in their studio the singer who was booked called in sick and I was asked if I could sing instead. You can imagine it came as a big surprise when Soulcast Ft Indian Princess ‘Someone Like Me’ ended up being a huge global club hit! About a year ago I was excited when I got introduced to D3FAI via Tony Byrne from Single Minded Promotions and the result was ‘Change The World’ – our first project and since then followed on by ‘In My Head’!

F: First of all, thanks for the invite! I got into the electronic music scene at 12, always listened to Hardwell, David Guetta, Tiësto, Deorro to say a few! Always dreamed of making my own music, playing big festivals full of people and travel around the world. I started making mashups, then edits with some production skills at the time and then suddenly started to make my own productions. The remix I did for ‘Lethal Industry’ by Tiësto got huge attention by the man himself and that made some other big DJs come around too – such as Hardwell, Blasterjaxx, Deorro and David Guetta etc. My path with Nathassia crossed when I met Tony Byrne at ADE on 2019. I was on Tour there and we met in a really nice bar with Harrison and his manager, we didn’t plan to meet each other but we did! We had a great time, shared my story with him and he was quite happy about it! Then a few months later he contacted me to start a new project and connected me with Nathassia and we’ve been working together ever since! We’ve got a lot of huge stuff in the works so a big up is about time.

EDM Nations:Congrats on your second collaborative release, ‘In My Head’ (Big Room Remix) – can you tell us about the inspiration behind your track & what brought you together again for this second project?

N: Thanks… Following the success of ‘Change The World’ and it being playlisted on MTV for 3 months it was obvious that we rock as a team!!! That, plus I loooove his productions so a follow up was inevitable. ‘In My Head’ was inspired by imagination, dreams and interest in virtual reality.

F: Well, back in May/April, Tony sent me some new vocals from Nathassia and I totally loved it! We started the project right away after ‘Change The World’ was released and we finally got it done in December! Really happy with the result as I got to showcase my new side of Techno on it which I really love!

EDM Nations:D3FAI, when it comes to your production style which element(s) come first in your process – the drop, the breakdown, the build, the melody or something else?

F: I always start with the drop, then I proceed by either doing the break or go with the Intro/Outro parts and from there I build the whole track!

EDM Nations:Nathassia, you have a distinctive & unique sound – can you share a little about your song writing process & how this has developed over time?

N: Thanks again! There are a few different ways that I go about song writing. In the case of ‘In My Head’, I initially wrote it as a top line over a track for Alesso! Songs that I write as a solo artist or with my band can either start by writing the lyrics or by producing a demo first. I get inspired by anything around me and I was lucky enough to have travelled all over the world before the recent travel restrictions, as this really opens up your mind. When I first started song writing I was about 15 and obviously I didn’t have that much “life” experience, so my song writing was limited. Luckily that improved over time as did my English language writing skills being my native language is Dutch.

EDM Nations:Over the years, you’ve both released numerous solo productions as well as a variety of collaborations with different artists – do you prefer one over the other?

N: No, I enjoy both just as much and time permitting, I tend work on both collaborations and solo projects at the same time.

F: I do think both are super important! Right now, I’m focusing more on my singles as I’ve released many more collaborations than solo releases. But I’m always open to collaborations if I really like the idea/project!

EDM Nations:Could you describe your signature sounds, in three words for us?

EDM Nations:Reflecting back across the unusual year that was “2020” how did you both find it in terms of the impact on you as artists?

N: 2020 began with a massive blow when all flights were cancelled just two weeks before I was due to go to Argentina to meet D3FAI and perform “Change The World” with him at Lollapalooza, Buenos Aires. Lockdown forced me to think outside the box, as I was no longer able to livestream my shows with my band, I was therefore determined to find other ways to continue to entertain my lovely fans all over the world. I learned how to DJ and I realised I had found a new passion! Things went really quickly from there, my team and I have been pleasantly surprised to see my Goddess Is A DJ show evolve from live streaming from my house, to a monthly show on the EDM Festival Channel of DIFM, to a monthly live show with big production streamed from my TV studio in London. The icing on the cake is that I have recently partnered with the Maestro platform who facilitate livestream events for the likes of Coachella, Deadmau5 and The Grammy Awards!

F: For me it impacted sadly because 1 week before my shows at Bass In Your Face (Paraguay) and Lollapalooza (Argentina) the lockdown announcement was made, and these events got suspended. I took the whole year for myself, working on my productions and my new sound for 2021 and I’m so happy with the result of it! I can’t wait to show everyone the new songs and projects I’ve done with Tony Byrne as well.

EDM Nations: And finally, looking ahead into 2021 and beyond – what are some of your goals & objectives, any exclusive news you can share with us?

On the live show front, I am excited to continue both monthly live stream shows, the new Nathassia Devine Show & Goddess Is A DJ Live, every fortnight. It allows me to get closer to my fans despite lockdown. The Nathassia Devine Show is live from my house every second Saturday of the month at www.nathassia.live and Goddess Is A DJ Live is every last Saturday of the month at www.goddessisadj.tv

F: My goals for this 2021 will def be get back to Touring, make some huge productions with some of the artist I really look up to, sign on some of my favourite labels such as Drumcode, Terminal M, Form, Heldeep to say a few, and make more livestream shows on some beautiful and crazy locations in my country Argentina and around the globe. Also, I have it in mind to start my own label but I’ll take my time to have everything sorted out as much as I can and with the right people to run that project!

I also will be part of a big project with my best friend Gandino which will be beneficial not only for us, but for lot of people, DJs and producers from Latin America and around the globe! So, be ready for big stuff happening in 2021 and in the next years ahead!