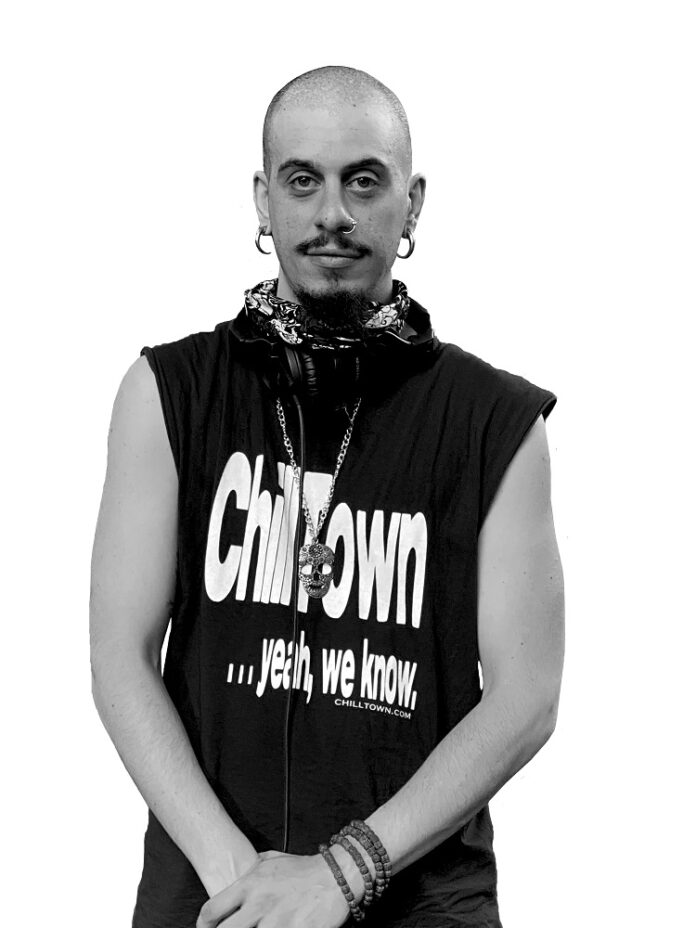 Astro Raph recently released “Axe God” on Trax Mission Records and we really loved this tune ! That’s why we invited him to a short interview and get to know him better:

I started DJing in the early 90’s when I was 12, I threw my first party for my 13th birthday party and DJ’d for the first time. My biggest influence at that time had to be a local DJ, Obvious World, who played the likes of The Shamen, Space Time Continuum, T-Power, Future Sound of London and The Irresistible Force.

Aside from him there were other DJ’s mostly from Europe and a few from Detroit and Chicago at that time DJing these college parties and other events. Raves were still new and these older kids were coming back from raves in big cities and sharing with us what we were missing. So, I got to hear some techno, a lot of house, hardcore breaks, early jungle roots, “rave” music and ambient.

The first things I actually heard at a friend’s place and was told what it was, was Orbital’s Diversions and Prodigy’s Break and Enter. Before that, I think the only thing I knew of that the DJ’s played was Moby’s Move and Aphex Twin’s Speed Racer.

I soon started going up to the record store in the closest city and also the Best Buy looking for electronic music CD’s.

When I was 14 years old though, a national rave tour came through a cornfield only 20 minutes from town. I somehow managed to convince my parents to drop me off without a ticket because they refused to buy me one, and I think I just walked in. This was Ravestock and it was the first time I heard Jungle music and it was on a huge system. I was hooked. A few years later I ended up working with Obvious World and he turned me on to a lot of music that still influences me today, especially T-Power, who also worked with Shy FX and did another project years later that influenced me as well: Chocolate Weasel.

What drew me in with all this was the idea that you could chop something else up and create anything was really inspiring to me. I also really liked fast music and really spaced out music that took you to another world and could literally transport an entire room of people to a very harmonious state by taking them through all kinds of experiences together.

Tell us about one of your most memorable DJ sets.

Fiske Planetarium in Boulder, Colorado, I think the year was 1999. I played all original tracks that night and blew people away with some genre bending tangents that didn’t seem to make sense but made perfect sense. The genres just fell into each other like some playful weird thing. I don’t think I had or have heard any of those tracks since at least the Y2K. The night was called “Chocolitarium”. That set was definitely talked about for a long time!

My dad’s old belt drive turntable, my dad’s old Sony CD player, a boom box with aux outs and an old radio shack mixer with a crossfader that crackled and missing knobs and faders that my friend gave me!

I tend to be a loner by and large but that aside I also love to do collaborations when they do come together.

I love to talk about an idea! Talking on the phone about what we’re going to do (or in person if we’re lucky!). Texting when breakthrough ideas hit. And executing the ideas to see where they lead us in good enough time to keep the momentum going. Often sending the same piece back and forth several times until it starts to feel closed to finished, and then I’ll go in and polish it.

So, for the album Strange Attractor, I really just started playing around with various synth plugins that inspire me and also Max for Live. A lot of stuff is Modular Synthesis either in VCV Rack recorded into Ableton or Reaktor Blocks and I also use a bit of Voltage Modular. I also tend to sync up Ableton with my hardware modular that is slowly growing and get some good loops or even a whole layer of a track.

It’s all discovery and exploration, but what I discovered in these sounds is myself. I found all my favourite sounds in these plugins just starting from scratch and playing around with synthesis mostly from nothing but the “init” patch. I love pulling up a soft-synth of a classic like the Arp Odyssey or Roland System 100 or even the Korg MS-20 and seeing what sounds I can make with them, usually powered by an arpeggiator or a midi sequencer. That usually leads somewhere.  It was a combination of going “oh wow that can do that” and “that sound is me 100%! THAT sound is the s*** that inspires me!”.

A lot of it is also feeling, and if I end up applying a theme or concept to it like I did with the title song Strange Attractor, then more elements may be added to enhance that or the concept may even be the source of inspiration itself as with Strange Attractor. I read up on a page that described what a Strange Attractor is and how it works again and again and tried to create the song based on that.

I also used UVI’s Falcon a lot in that track and it has a Lorentz Transformation LFO! That was like the official Strange Attractor stamp when I added that touch, but the whole song was based on reading about the Strange Attractor and trying to make an electronic song that operated in the same way.

I’m definitely having a lot of fun as a DJ right now in my sets, exploring very strange new territory like a new take on Hi-NRG meets Warp Records. The biggest challenge right now is probably getting people to listen to them. To solve this, I’ve been working on blurring the lines between producing, performing live and DJing. I created something I call “Tiny Devices Concerts” inspired of course by NPR’s “Tiny Desk Concerts”.

For this I use a variety of App’s on Android and iOS and sync them together using Ableton Link. So, I’ll build a track using say, Funkbox on an iPhone, Remixlive on an Android, G-Stomper on a Tablet and MI Rack on an iPad. It’s the old school way of making music but with cutting edge technology that is in everybody’s pocket.

So, I’ll build parts of a track mixing these in and out with a tiny Hart Mixer (which adds a nice compression and saturation). I can also use DJ App’s and throw original tracks in or remix tracks live using Ninja Tune’s “Jamm Pro” (which I love very much!). Don’t get me wrong though, I like to throw a few Korg Volca’s in there too for some real boutique analogue flavour in the mix! I found a cool App on iOS called “Midi Link Sync” that lets you send a Midi clock to Ableton Link! The technology is really exciting right now.

Yes! I had three so far this year! A full length on Cyborg Recordings, “Simple as They Come”, and a single on Trax Mission Records, “Axe God”. I also just released a side project on BandCamp in the genre of “Comfy Synth” called “Journey to the Moon” that I plan to also put out a limited-edition vinyl of at some point.

My sound has come to have a LOT of influences over the years, all the way from major artists like Kraftwerk and Jeff Mills to very talented friends that no one has heard of like ChillTown Maui and many artists in between like Paul Johnson and Doormouse.

Finding ways to stay true to my original sound (you can hear it in my work as Yacob in 1998, Freakie People – Awake In The Lap Of A Dream [https://obviousworld.bandcamp.com]).

This sound is about a certain fantasy dreamscape of ambient atmospherics, but with a passionate soul-searching melody. The other side of this sound is the trippy audio collage, jazz inspired rhythms and I’ve also discovered my music has a dark side.

So, all this is now woven into the many strange worlds of electronic sounds I currently explore. I do my best to keep up with it all!