EDDIE directs ‘A Remix Pack’ EP with takes from Dirty South, Blanke, and No Mana to mau5trap 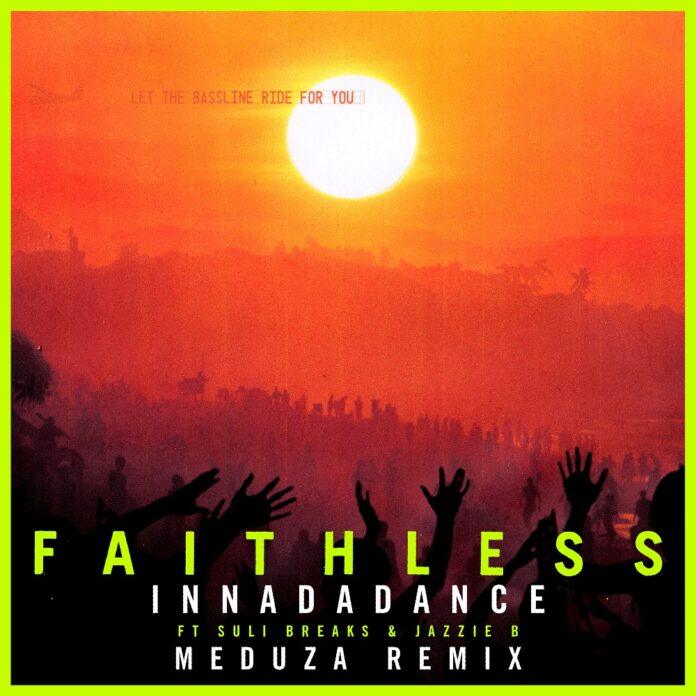 ‘Innadadance’ – the sumptuous third single to be taken from Faithless’s acclaimed album ‘All Blessed’ – gets a powerful reworking from world-renowned Italian electronic production trio Meduza, which is released on 9 July on BMG. The Meduza remix will also appear as part of a special Digital Deluxeedition of ‘All Blessed’, released on 6 August which features original mixes, plus remixes of ‘Synthesizer’, ‘I Need Someone’, and the forthcoming Claptone remix of ‘Innadadance’.

The soulful highlight of Faithless ‘All Blessed’ is moved firmly into peak-time club territory by Meduza, who, as big fans of the iconic dance outfit, wanted to evoke memories of classic Faithless remixes with their reworking of ‘Innadadance’. Meduza’s update features adrenaline pumping beats, stabbing string chords and pulsating synths swirling alongside the unforgettable vocals of Soul II Soul’s legendary Jazzie B and spoken word poet Suli Breaks to deliver a mesmerising cut which was made for the dancefloor.

‘Innadadance’ is the third single to be taken from Faithless ‘All Blessed’, their first studio LP in 10 years, out now on BMG and winning rave reviews from press and fans alike. Featuring in several Best Albums Of 2020 lists, ‘All Blessed’ charted at No.6 in the Official Album Chart and No.1 in the Dance Album Chart and No.1 in the Independent Album Chart. Previous single ‘I Need Someone’ was supported by acclaimed remixes from leading electronic producers Yotto, Alok, Paul Woolford, and Faithless’s Sister Bliss. ‘Synthesizer’, the album’s first single, was backed by remixes from Maceo Plex, Cristoph, and Patrice Bäumel. Both ‘Synthesizer’ and ‘I Need Someone’ received strong support, including BBC Radio play from Pete Tong, Annie Mac, Jo Whiley, Annie Nightingale, Shaun Keaveny, and Nemone. DJs supporting the track included Tiesto, Roger Sanchez, John Digweed, Marco Carola, Claptone, Gabriel & Dresden, and Kryder.

In a history that stretches back some 25 years, Faithless have long occupied a pivotal position in the world of British electronica. Marrying elements of house, trip-hop, dub and a songwriting flair into arena-filling explosive, euphoric sounds. Their accomplishments tell their own story: seven Top 10 singles, six Top 10 albums (three at Number 1), a Mercury Prize nomination for their brilliant sophomore album, 1998’s ‘Sunday 8PM’ and their impressive four times Platinum certified ‘Forever Faithless – The Greatest Hits’ adding to a career total in excess of 15 million worldwide. Faithless have graced festival stages the world over, including Glastonbury’s famous Pyramid Stage twice. Globally, they’ve sold out multiple arena runs. The new Faithless album ‘All Blessed’, their first studio LP in 10 years, is out now on BMG and has been winning rave reviews from press and fans alike. ‘All Blessed’ charted at No.6 in the Official Album Chart and No.1 in the Dance Album Chart and No.1 in the Independent Album Chart.