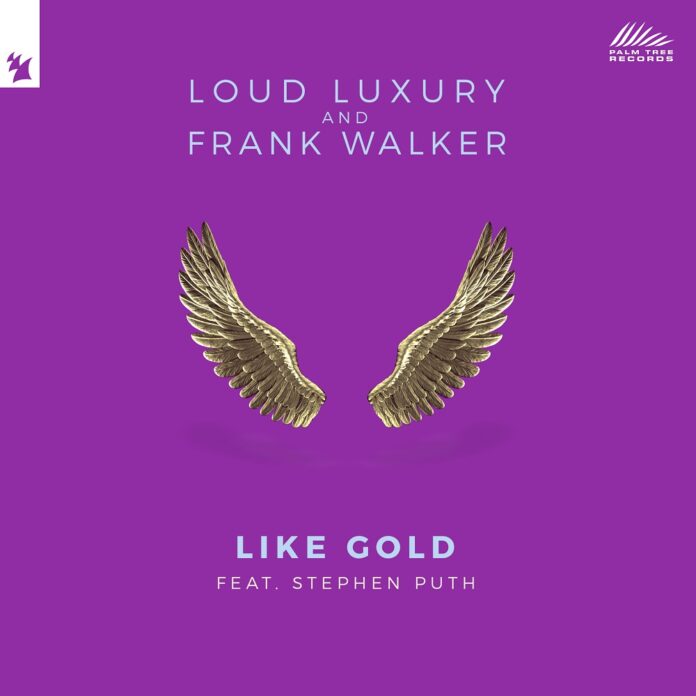 Canadian stream machines Loud Luxury have added to their hit-packed discography with another ridiculously catchy single. Hotly anticipated since the release of their ‘Nights Like This EP’ and ‘Aftertaste’ (feat. Morgan St. Jean) in March this year, ‘Like Gold’ sees them shake hands with 2020 JUNO nominated (and fellow Canadian) DJ and producer Frank Walker and American singer-songwriter Stephen Puth.

Following on several top-drawer singles released through their ‘Nights Like This EP’, ‘Like Gold’ marks the next dance-pop hybrid track from Loud Luxury. Combining a suspenseful instrumental backdrop with immersive vocals that draw listeners in by the dozen, this 24-karat collab with Frank Walker and L.A.-based singer-songwriter Stephen Puth is as pure, precious and sought-after as its title implies.

“We’ve been friends with Frank since our university days playing shows across Canada”, Loud Luxury explain. “When we moved to Los Angeles, we met Stephen and we quickly became great friends. The vocal for ‘Like Gold’ actually started when he was over at our house for a barbecue. After a few drinks, we convinced Stephen to jump into the booth and that’s how the song started. Bringing together where we came from and where we are today into one song was very special to us. We hope you enjoy!”

“This is such a special song for me, as I’ve been close with Andrew & Joe (Loud Luxury) for years”, Frank Walker adds. “We all started DJing at the same time in university, have played countless shows together, and have been looking for the perfect record to collab on for a long time. To me, ‘Like Gold’ is the perfect combination of what we can both bring to the table: a mix of driving basslines, melodic breakdowns and lyrics that are both ballad-y and hooky at the same time. We all put a special part of ourselves into this record and I think it really shows. The final touch that Stephen Puth’s singing added to song really took things next level. His voice really adds a melancholic-pop feeling to the song and drives the emotion of ‘Like Gold’ home. Everything in the track came together perfectly. I can’t wait for the world to hear it.”

“I’m incredibly happy to be a part of ‘Like Gold’ with Loud Luxury and Frank Walker”, Stephen Puth says. “Collaborating with friends is always a great way to make music. We all brought our own styles of music to the table and ended up with a unique song.”

It’s been an amazing ride for university friends Andrew Fedyk and Joe De Pace, better known as Canadian duo Loud Luxury. With their now worldwide smash hit ‘Body’ (feat. Brando), the Toronto boys are certified Diamond (10x Platinum) in Canada, 6x Platinum in Australia, 3x Platinum in Switzerland, Double Platinum in Austria, Denmark, U.K. and the U.S., and Platinum in the Netherlands, Norway and Sweden. ‘Body’ also held the #1 spot in the U.S. Mediabase Dance Airplay chart for two weeks, charted in the Top 40 of U.S. Pop radio and the U.K.’s Official Singles Chart (#4) and accumulated over a billion plays across the most popular streaming services. Its follow-up single, ‘Love No More’ (with anders), garnered 12 million streams on Spotify alone in its first month and currently sits at 140 million plays on the streaming platform, whilst last summer’s ‘I’m Not Alright’ (with Bryce Vine) adds to the tally with well over 70 million streams. Earlier this year, the duo scooped up three 2020 JUNO Awards nominations for ‘Dance Recording Of The Year’, ‘Fan Choice Award’ and ‘Group Of The Year’ (including one win) following four nominations (including one win) in 2019 as well as iHeart Music Awards nominations for ‘Dance Song Of The Year’ and ‘Dance Artist Of The Year’.

Frank Walker is no stranger to the highest reaches of the electronic music space. Touted as an iHeartRadio Future Star and a Billboard Rising Artist, the Canadian DJ and producer rapidly became a mainstay in Spotify’s Dance and Pop playlists through collabs with the likes of R3HAB, official remixes for Kygo, Marshmello, Bastille and Loud Luxury, and recent singles such as ‘Heartbreak Back’ and ‘Only When the Rains’, both of which claimed a Top 10 spot on Canadian Top 40 radio. The latter, which was a collaboration with Astrid S, even earned him a nomination for ‘Dance Recording of the Year’ at the 2020 JUNO awards. Having written songs for artists such as The Vamps, Pretty Much, Daniel Skye, Jack & Jack and Stanaj before deciding to become an artist in his own right, Stephen Puth amassed over 30 million streams with his first two singles.

Praised by Billboard and Ones To Watch for having a “flawless” voice as well as “creative lyrics and catchy melodies”, the Los Angeles-based singer-songwriter immediately followed suit on the live front by opening for Astrid S on her Los Angeles and New York show dates as well as opening for Lizzo’s radio show in Chicago. In June last year, he released ‘Look Away’ alongside brother and fellow musician Charlie Puth, earning him critical acclaim as well as a spot in the Top 40 at pop radio. It’s safe to say that Stephen Puth is ever accelerating on his road to stardom, and this brand-new collab with Frank Walker and Loud Luxury certainly is testament to that.