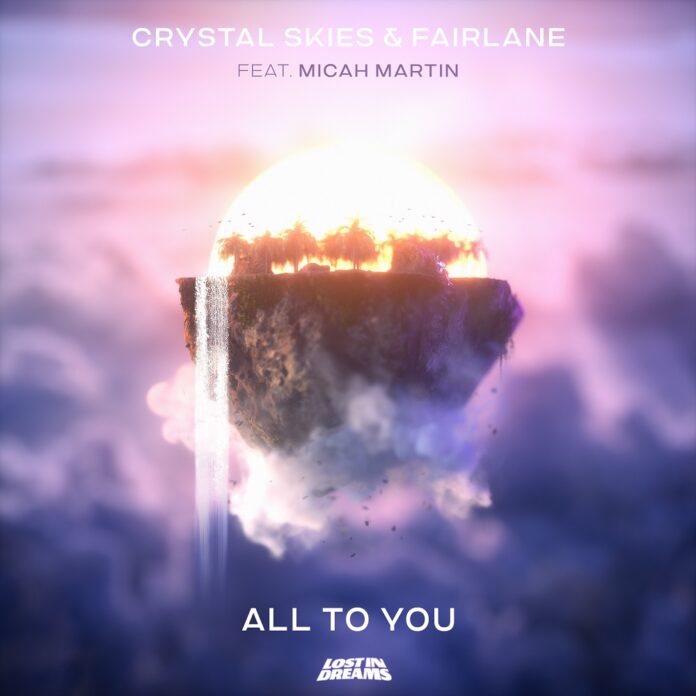 Emotive melodic bass duo Crystal Skies make their return to Insomniac’s burgeoning young label Lost In Dreams alongside multi-instrumental electronic act Fairlane.  The collaboration ‘All To You’ sees Micah Martin grace the track with his anthemic vocals and is available June 25 on all streaming services.

‘All To You’ marks Crystal Skies sophomore release on the Lost In Dreams label, riding on the heels of the notable successful ‘Crazy While We’re Young’, the act continues to grow and diversify in each release. Their establishment with Lost In Dreams is sure to result in many releases to come and will see them play the label’s inaugural festival in Las Vegas this September.

Drawing his inspiration from the emotional era of rock music, and applying an innovative electronic twist, Fairlane’s collaborative effort with Crystal Skies adds dimension and character that only organic and live instrumentals can produce. “‘All To You’ is a song about gratitude”, Fairlane shares.  “Sometimes in life you’ll meet other individuals who have the power to save you/pull you out of a bad place. We wanted to keep this track centred around the message Micah Martin was trying to deliver, but open it up to an energetic climax in the drop, and I think we accomplished that perfectly.“

Elaborating on his vocal contribution to the track, Micah Martin shares “This song is about how someone can show you a level of love and kindness that changes who you are as a person. Everyone needs someone to hold close and tell them that they’re worth it.”  Emotive and powerful, as is the ethos of Lost In Dreams, Micah makes an impact through his anthemic vocal range and lyricism. As Micah Martin works diligently on his pop-leaning debut studio album slated for release later this year, his cuts with Trevor Daniel, Imanbek and Don Diablo, including both the ‘Travis Barker Alt Version’ and the original  for ‘Kill Me Better’, position him as one to watch both in his dance features and original works.

Insomniac’s Lost In Dreams label is the new home of melodic bass and euphoric electronic music. With a festival debut on the books for September 4th in Las Vegas, NV, fans can expect to see Crystal Skies grace the stage alongside top acts of the genre Seven Lions, Autograf, SG Lewis, Nurko alongside label mainstays Kaivon, Highlnd, Rival, Friendsone and Danny Olson.