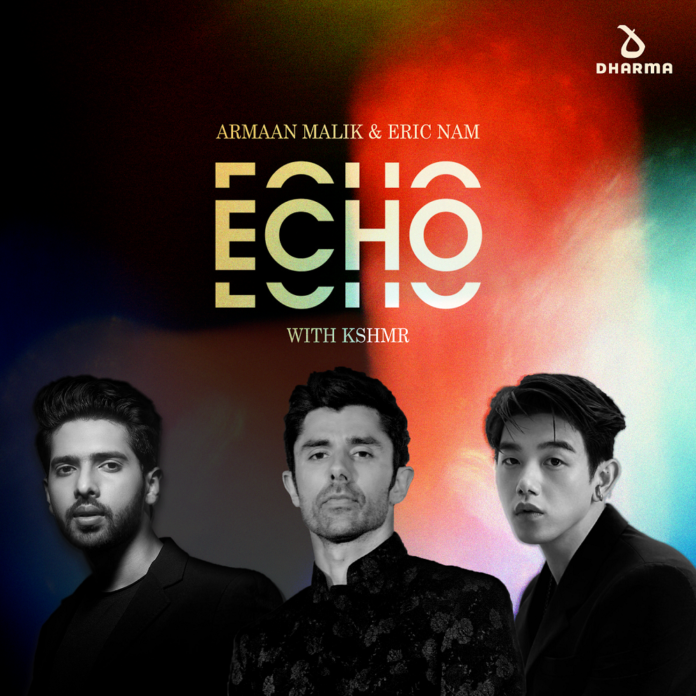 Three icons from around the world, Indian popstar Armaan Malik, multi-faceted Korean American artist Eric Nam, and platinum music producer KSHMR have come together for a collaboration of epic proportions in the form of ‘Echo’.

While the audio is an eclectic concoction that’s one of a kind and the perfect blend of all three’s artistry, ‘Echo’ lyrically articulates the feeling of indecisiveness in a relationship that pushes partners off the edge. The accompanying music video captures the artists in  their natural element powerfully bringing the emotions of the song to life.

Talking about how the track took shape, Armaan said, “‘Echo’ was incepted when I met KSHMR in Los Angeles right before the onset of the global pandemic and the release of my first English single. He played some unreleased material including ‘Echo’, it just stuck, and I recorded my demo verse at his studio itself. Around mid-2020, Eric and I had this little interaction on Twitter that sparked off an internet friendship and our teams got connected as well to discuss a potential collaboration. The track we all gravitated most towards was ‘Echo’ and we spent the next few months making it sound like it does right now. It feels amazing to create a magnificent song with such talented artists like KSHMR and Eric!”

‘Echo’ in its own right is a never seen before story of three artists who have a deep- rooted Asian heritage and have united to commemorate their contribution to the entertainment space from their respective geographies.

Eric Nam added, “Incredibly excited to be a part of this song with Armaan and KSHMR, especially as we release during this month that celebrates the AAPI Community. We’ve been working on this song for some time now and quite honestly, I wasn’t sure if it would ever see the light of day. But, I’m so glad that we get to share this with the world and for us to be able to create this collaborative moment across continents and cultures. I hope our fans and listeners love it as much as we did putting it together!”

Released via KSHMR’s own genre-defying record label, Dharma Worldwide, ‘Echo’ couldn’t have found a better home. It’s the first K-Pop meets I-Pop collaboration built around a meticulously crafted EDM soundscape.“’Echo’ was a demo I started years ago, unsure of how to finish it until I met Armaan. The voice and story he brought to the song was the perfect fit. Eric lent his awesome talent and it became a cross-country Asian collaboration, which I love. ‘Echo’ is a song about tough relationships that I think we can all relate to,”KSHMR concluded.