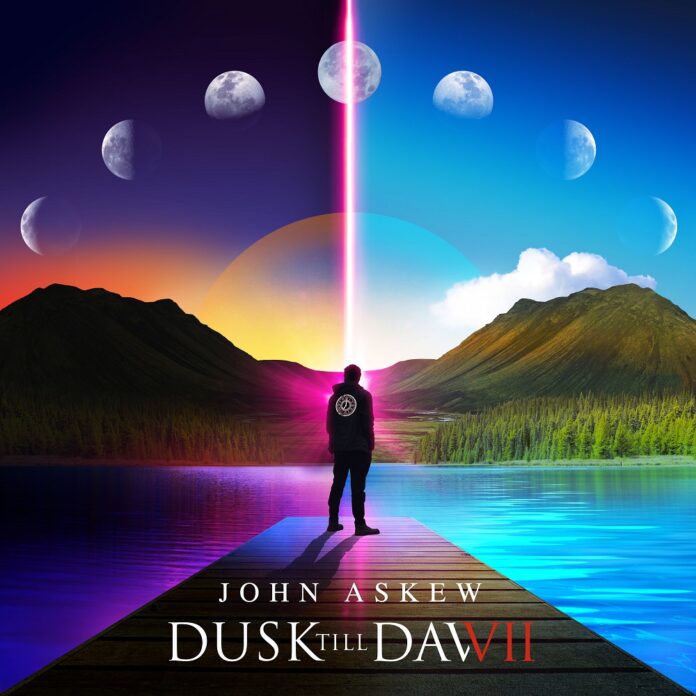 Comprising thirty-six tracks, ‘Dusk Till Dawn’ is armed with ten purpose-built John Askew reworks and two brand new studio creations, all of which feature exclusively. Further you’ll find eleven previously unheard, desk-hot productions from some of John’s favourite producers, as well as a mountain of the freshest & primest from VII and its sister label Deep In Thought.

Dispensing with the formalities, frontend of Dusk’s disc John goes right for the tech jugular with his reworks of Union Jack classic ‘Cactus’ and Will Atkinson’s ‘Awake’. From there he takes aim with a track/remix salvo from the likes of Sean Tyas, EverLight, Alex Di Stefano, Paul Denton and others. Bookending ‘Dusk’ is new Askew studio summoning ‘Keep Pushing’ and Will Atkinson’s ‘Pipe Dreams’, whilst the release’s meridian moment is marked with the oasis-like calm of BT & Christian Burns’ ‘Save Me’.

Just ahead of the album’s release, John commented: “Dusk is the music I love to hear when it gets dark and things go harder and more twisted. Whereas Dawn shows off my more melodic side as night transitions to day and the festival vibes kick off. As well as all the killer current music I wanted to rework some of my favourite classics to include – from the likes of NU NRG, Union Jack and Paul van Dyk to give a fresh 2021 twist to those seminal classics that for me were – and always will be – the purest and most epic forms of trance.”

With Beatman & Ludmilla’s ‘The Fall’, John embraces the Dawn on a Psy note, before hitting a hot run of Askew reworkings, on music from Steve Brian, Ronski Speed, NuNRG and Milla Lahto. Further in, Story Of Oz’s remix of Sean Tyas’s ‘Someday’, Story’s own ‘Somersault’ and John’s freshly pressed remix of PvD’s ‘Crush’ pave the way to the mix’s valedictory track, Will Atkinson’s ‘The Last Rave On Earth’.

For lovers of true trance ‘Dusk Till Dawn’ delivers a fast-lane journey across its sonic range, going full throttle first minute though last. ‘Dusk Till Dawn’ is available through all good streaming and sales platforms from April 30 and is a must for John Askew fans old and new. Pre-order/save here, now (https://vii.complete.me/dusk).