We’ve drafted in Greg Wilson, the former electro-funk pioneer, nowadays a leading figure in the global disco/re-edits movement and respected commentator on dance music and popular culture, to bring us four random nuggets of history; highlighting a classic DJ, label, venue and record each month. 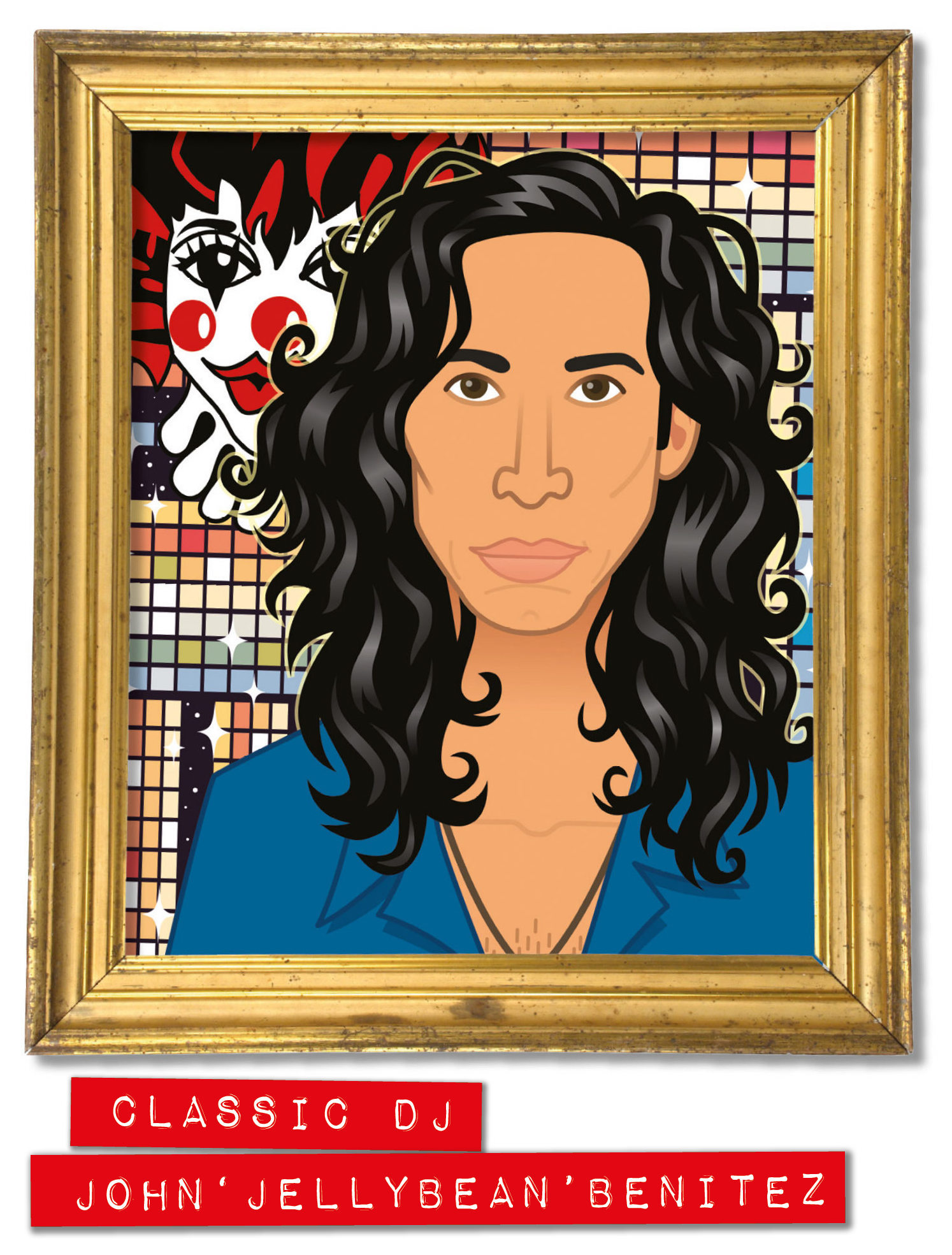 The Latino contribution to disco and dance culture is largely underplayed. Having had a peripheral influence during the proto-disco period, its arrival was confirmed when New York’s legendary Salsoul label launched in the mid-‘70s bringing a distinctive Latin flavour into play.

John ‘Jellybean’ Benitez was a DJ and producer who appeared at the perfect moment, becoming the first Latin superstar of the dance scene – his residency at The Funhouse elevating his status, the venue immortalised when Manchester band New Order used it as a location for the filming of their promo video for ‘Confusion’ in 1983 (the track mixed by Jellybean and producer Arthur Baker).

Born to a Puerto Rican mother in the South Bronx, Jellybean gravitated towards music at a young age, soon realising he could change the mood of the room by selecting certain tracks. His sister gave him his nickname because of his JB initials.

He started DJing in 1975 at Bronx club Charlie’s, but had his sights set on Manhattan, finding his way to the Big Apple’s heart via Experiment 4, Xenon and even Studio 54. However, it was at The Funhouse, where he was resident between April ‘81 and June ’84, that things really took off, his audience, known for their athleticism on the dance floor, containing a large Puerto Rican contingent. Louie Vega would set his own trajectory in the same building in 1985 (the venue name changed to Heartthrob), subsequently resulting in his hook-up with Kenny Dope and the creation of their own Masters At Work dance dynasty.

Having landed a mix show on NY’s popular WKTU radio station, Jellybean’s status was majorly enhanced when he co-mixed one of 1982s biggest club tracks, the Arthur Baker produced ‘Walking On Sunshine’ by Rockers Revenge. Other Jellybean mix credits that year included Warp 9’s ‘Nunk’ (which he also co-produced), ‘Pack Jam’ by The Jonzun Crew and Jimmy Spicer’s ‘The Bubble Bunch’.

He would soon be positioned at the top table of New York’s remix elite, whilst helping his then girlfriend, Madonna, achieve her first hit with ‘Holiday’, which he’d produced.

He moved further into production and began writing his own songs, as well as contributing to film soundtracks including ‘Flashdance’, ‘Top Gun’ and ‘Back To The Future’. His 1984 cover of Babe Ruth’s ‘The Mexican’ made its way to #1 on the US Billboard Dance Chart, and he’d subsequently work his magic for pop stars including Whitney Houston, Michael Jackson and Paul McCartney, to name but a few.

In 2005 Jellybean was inducted into the Dance Music Hall Of Fame, and he continues to DJ to this day. 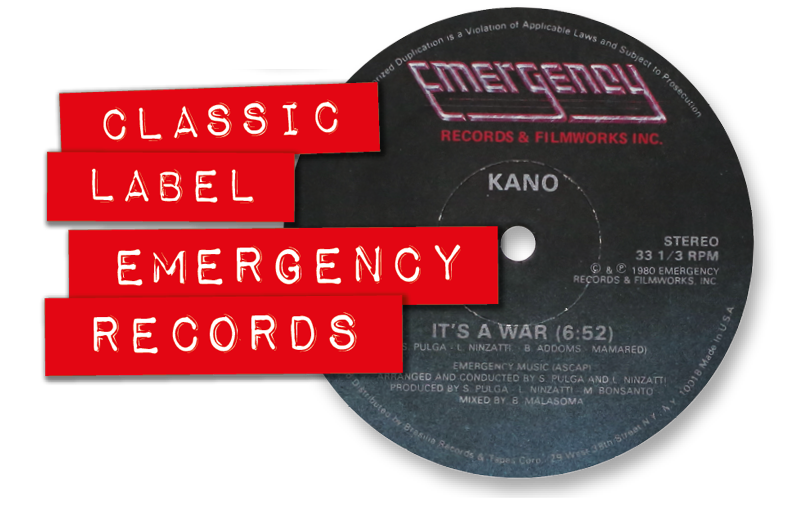 Having worked for Freddy Naggiar’s Baby Records, key to the rise of what would be retrospectively termed Italo Disco, in 1979 Cossa moved to New York to set up Emergency, an offshoot of Baby. However, due to business differences, Cossa and Naggiar soon decided to part ways, Cossa taking full control of Emergency, producing records both in Italy and New York.

Early success came in 1980, courtesy of Italian group Kano who scored top 10 Billboard dance hits with ‘I’m Ready’ and ‘It’s A War’, and Emergency quickly positioned itself amongst the leading underground labels of the early ‘80s, stacking up an impressive array of club favourites including Firefly’s ‘Love (Is Gonna Be On Your Side)’, Northend Featuring Michelle Wallace with ‘Happy Days’ and ‘Feels Good (Carrots And Beats)’ by Electra.

‘Happy Days’ gave era-defining producer Arthur Baker his big break. He’d start his own label, Streetwise, the following year, as well as producing tracks on another crucial new imprint, Tommy Boy – not least Afrika Bambaataa & The Soul Sonic Force’s electronic masterwork ‘Planet Rock’. If you flipped the Tee Scott mixed ‘Happy Days’, as myself and many other DJs did, you’d find the mainly instrumental ‘Tee’s Happy’ – the contribution of the Better Days DJ deemed important enough to name-check him in the title (as would the subsequent Michelle Wallace single ‘It’s Right’/‘Tee’s Right’).

Electra’s ‘Feels Good’ provided the bassline source for Jamie Principle’s ‘Your Love’, a key marker in the emergence of Chicago house, officially released in 1986, following reel-to-reel and acetate plays by DJs including Frankie Knuckles – a Knuckles produced version issued in 1987. The instrumental of this was inventively mashed-up by London’s DJ Eran with an obscure Candi Staton acappella, bizarrely recorded for a diet video. Initially pressed on bootleg by UK DJ/producer John Truelove, a cult club classic resulted. An official version, ‘You Got The Love’ by The Source, took the track into the UK top 5 in 1991.

Emergency would embrace the new electro sound that dominated New York’s clubland in 1983 via tracks like ‘In The Bottle’ by C.O.D., Xena’s ‘On The Upside’ and, most notably, Shannon’s ‘Let The Music Play’, a huge worldwide hit heralding the arrival Latin freestyle, Shannon going on to achieve further US dance #1s with ‘Give Me Tonight’ (1984) and ‘Do You Wanna Get Away’ (1986).

With Emergency’s latter releases failing to scale the heights of its previous output, the label closed in 1989 – its back-catalogue sold to Unidisc Music. 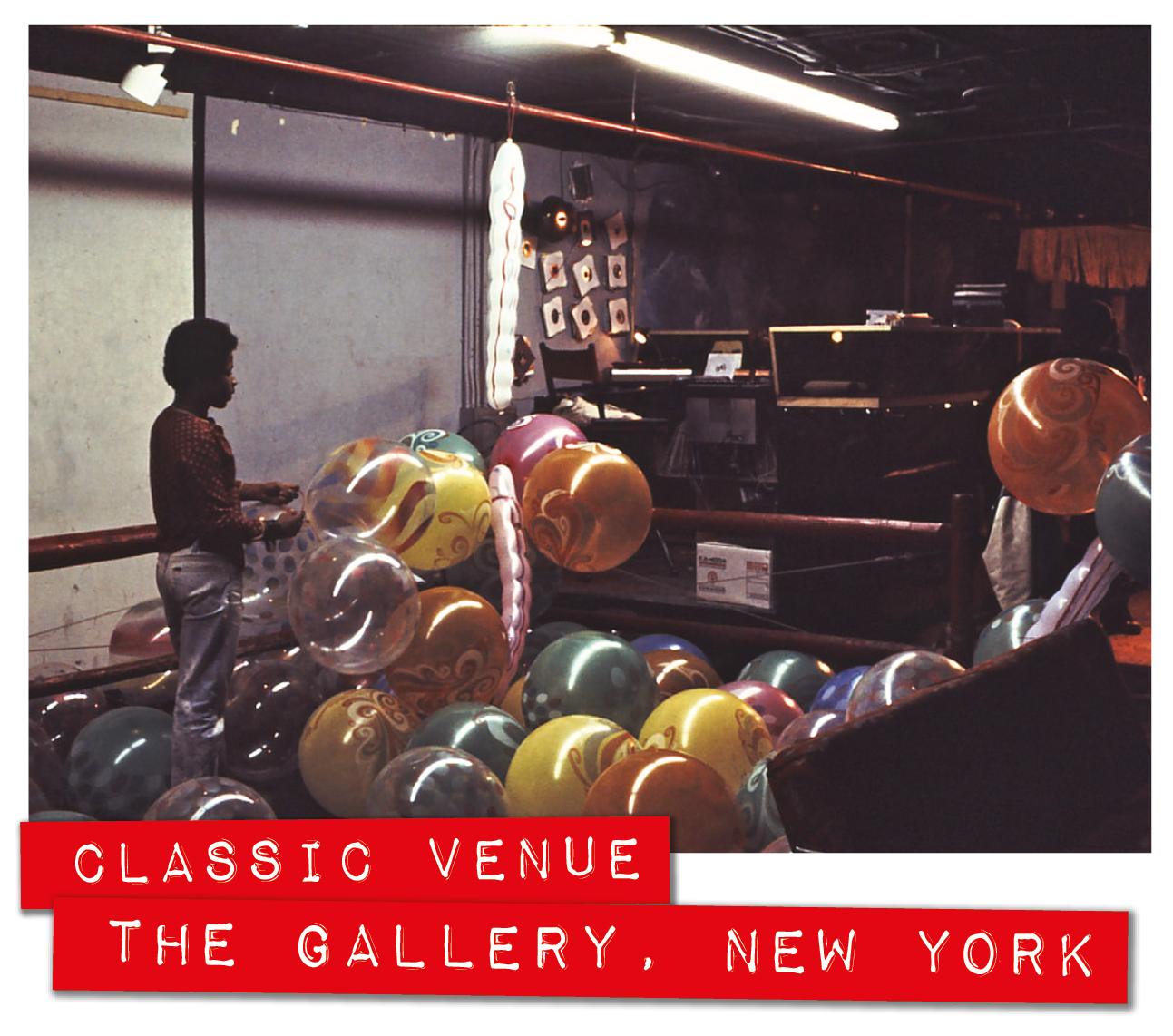 The Gallery was amongst NYC’s most influential venues of the ‘70s. Its DJ and heartbeat was Brooklyn born Nicky Siano, who, during the early part of the decade, whilst in his mid-teens, began attending David Mancuso’s Loft parties. Repeatedly caught dealing drugs there, he was eventually banned, prompting the decision that if he couldn’t go to the party, he’d throw his own.

Having cut his teeth at The Round Table, Siano, his then girlfriend Robin Lord and brother Joe, found their own Manhattan loft party space. Whilst originally geared towards a straight audience, The Gallery adopted the template of Mancuso’s parties, right down to the balloons – teenagers Larry Levan and Frankie Knuckles amongst those who’d blow them up (Levan practiced on The Gallery’s decks when the club was closed, Siano his mentor, as well as at one point his lover).

Loft sound-designer Alex Rosner installed the system and in February ’73, just ahead of Siano’s 18th birthday, The Gallery launched. Having struggled to establish itself, serendipity stepped in when The Loft temporarily closed during the summer, leaving their audience, both gay and straight, black and white, looking for somewhere to go in the meantime.

The Gallery skyrocketed as a consequence, Siano’s flamboyant personality infectious as he intensively stoked-up the screaming crowd’s frenzy. The sign over the DJ booth said ‘Welcome Home’ and to the regular attendees it was exactly that, a place where they could be themselves and lose themselves in sound.

Encouraged by his personal DJ mentor, David Rodriguez, Siano became an early exponent of beat matching, building a reputation for the skilled ‘blending’ of his selections – mainly funk and soul, but also drawing from rock, jazz and gospel. Many selections were celebratory, their messages reflecting the countercultural gains of the previous decade. Gallery classics include ‘Law Of The Land’ by The Temptations, ‘Melting Pot’ by Booker T. & The M.G.’s and MFSB’s  ‘TSOP (The Sound Of Philadelphia)’ and ‘Love Is The Message’.

The Gallery closed in 1977 following a dispute between the brothers, brought to a head by the DJ’s drug use. Moving on to after-hours venue Buttermilk Bottom, Siano would also spend four months at NY’s famous Studio 54 and attempt a Gallery ‘re-opening’, but his star had faded by the onset of the new decade.

Siano’s legendary penchant for getting high would take its toll, resulting in years lost to heroin addiction, but he’d eventually experience a renaissance, claiming his rightful place as an all-time DJ icon.

Historic film footage from the venue was issued on DVD in 2014 as ‘Love Is The Message: A Night At The Gallery 1977’. 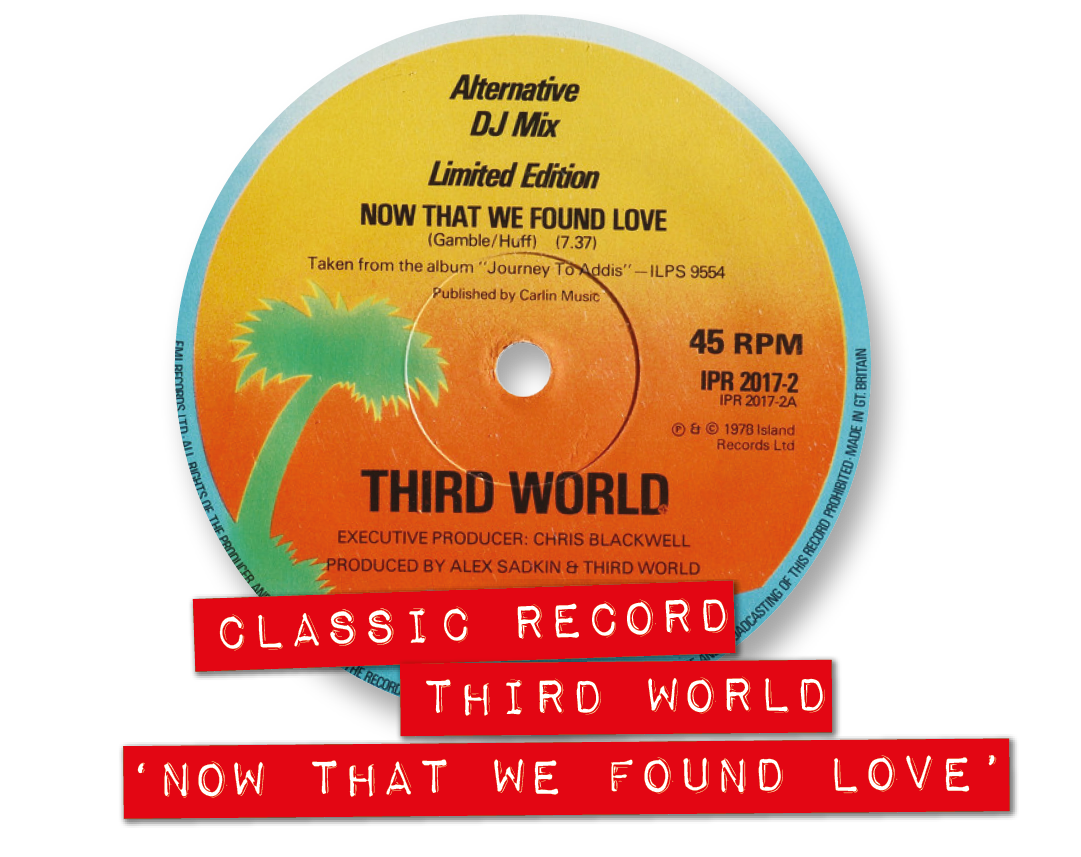 In 1978, Jamaican band Third World unleashed their uplifting reggae-disco fusion, ‘Now That We Found Love’, written by Philadelphia soul icons Kenny Gamble & Leon Huff and originally recorded in 1973 by The O’Jays on their album ‘Ship Ahoy’. The Third World cover version went all the way into the UK top 10, whilst becoming a top 50 pop hit and top 10 R&B hit in the US. Strangely it remained absent from the US disco chart, despite achieving classic status at David Mancuso’s Loft parties, whilst featuring at the Paradise Garage and elsewhere in NYC.

From a UK perspective, reggae had been a part of the musical landscape since the emergence of ska in the early ‘60s. In 1968, with Jamaican recordings really making their presence felt, Trojan Records was formed – a British label (and subsidiaries) that released hit after hit by JA artists including Desmond Dekker, The Upsetters, Jimmy Cliff, Bob & Marcia, Dave & Ansel Collins, John Holt and Ken Boothe.

Founded in 1973, Third World first emerged as one of the few fully self-contained Jamaican bands who thrived without sound system patronage, playing primarily in Kingston’s hotels and nightclubs. This gave them a niche but also made things difficult because the sound systems owned the record labels in their home country. The solution to the problem lay in England where they signed to Chris Blackwell’s Island Records, the label that had launched Bob Marley & The Wailers onto the international stage.

The groundwork was laid with their self-titled debut album, issued in 1976, and the ’77 follow-up ‘96° In The Shade’, but it was with ‘Journey To Addis’, which included ‘Now That We Found Love’, that things really took off for Third World, the LP making the UK top 30.

Co-produced by Alex Sadkin, who would later work extensively with Grace Jones, ‘Now That We Found Love’ was one of a handful of reggae-disco crossovers during the period – these also included 1977’s ‘Exodus’ and ‘Jamming’ by Bob Marley & The Wailer’s, as well as their 1980 hit ‘Could You Be Loved’, plus 1979’s ‘Living On The Frontline’ by British artist Eddy Grant.

It would never get quite so good for Third World again, although 1982’s ‘Try Jah Love’, co-written and produced by Stevie Wonder, would see them gain success in the clubs once more. They would continue to perform and record and, in 2013, would celebrate their 40th anniversary.

In 1991, ‘Now That We Found Love’ would return to the chart with Jamaican-born US hip-hop artist Heavy D securing his breakthrough hit via his rap rendition.

Check out the next Discotheque Archives here